Jonathan Notley (Bliss), Max McKinnon (Eso) and Tarik Ejjamai (DJ Izm) better known as BLISS N ESO, one of Australia’s most successful and esteemed acts, recently stopped by New Zealand to not only celebrate the upcoming release of their highly anticipated sixth studio album Off The Grid, but also announce their first tour throughout NZ this July.

During their fleeting visit, McKinnon (Eso) was also kind enough to sit down with us for a chat about the album ~ working through tough times, establishing new beginnings and what the term Off The Grid means to him…

Welcome to New Zealand, it’s great to finally have you guys on this side of the ditch!

Thanks! The last time I was here was about eight years ago when we played a kids 21st birthday (laughs). This guy really wanted us to play his party so his mum called us up and we flew over and performed in their lounge, using the couch as a barrier. It was really weird! 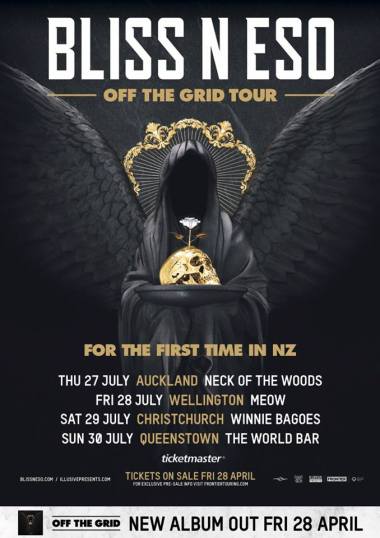 Crazy! Speaking of performing, we’re very excited about the NZ tour announcement you made this morning..

Same! We just want to say, sorry we’re late! We should have come here so many times already, but it has been about getting to all of those different places beside the big cities, you know.

Before we were on the radio and winning awards, we were getting on buses, trains and going to all the small-town pubs, trying to play as many live shows as we could and that is what helped us build our fan base to what it is now. But we’re very excited to finally announce this tour.

With less than one week until Off The Grid is released, how are you feeling?

Excited! It has been way too long between records. We started working on this one about two and a half years ago. We recorded all over the place in Sydney and Melbourne, so now that we finally have everything together and ready to go, I believe the fans are bloody hungry and we’re ready to quench their thirst!

Having been together as a group near 17 years now, how is it looking back to the very beginnings of Bliss N Eso and how much things have changed?

It is bloody crazy! We’re now living in an age of streaming music, there’s no tapes anymore. When we first started we had no idea how it was done. We were asking ourselves ~ Do you get the beat first or do you write the beat? Where do you get the beat from and how do you make beats? (laughs) When we wanted to record we literally had one boom box with an empty, blank cassette tape and another with a cassette that had the beat on it. We’d push play on the beat-tape then rap into the speaker and press record on the other. You couldn’t tape over bits either, so we would have to get little bits of paper and stuff them into the top, it was very primitive. Whereas now we can just go into the studio where we not only have the space but also the time to be creative.

It has been a wild ride!

That is absolutely amazing! So how does the creative process work for you guys in the studio then?

Our first couple of albums were very much done in the way that we would put the beat on then press record and freestyle for four or five hours, then go back and see what flowed.. But with Off The Grid there wasn’t so much free-styling because we had a strong sense of concentration when it came to being detailed about what the topic was.

So the way it works is that,  we might get about 40 beats from a certain producer that we all go through together before voting on which ones we’re vibe-ing to most. Then Jonathan (Bliss) and I will go away and work on our rhymes separately once we know what topic and emotions we’re going to talk about. So instead of this record being a wild painting, it’s more of a portrait as we took our time to truly figure it out.

On that note, the record seems to obtain a very forthright sense of honesty about overcoming your own personal struggles and establishing new beginnings, particularly on the track Devil In My Shoulder…

Definitely. When we started getting gigs they would all be in bars and the music industry just fuels you with whatever you desire, so once we’d finished our set there’d be three bottles of tequila and four cases in front of us, then it would be there again the next night, over and over. So basically I fell into a very brutal pattern of heavy drinking, that no one saw as a problem because I was still managing to perform, write new rhymes and get things done..

When we got invited to go over to Afghanistan to play for the troops, an opportunity I knew was once in a lifetime, I didn’t want to go because not only is Call Of Duty on my couch the closest I ever want to be to war, but I knew it was a dry spot, meaning you can’t drink there. But following those shows we went straight to tour Canada and that’s where I decided I had to stop. I should have gone to rehab or a safe place, except I went from one hospital, with a drip, onto the stage and then back to hospital in the next town. I could have died, because your body can shut down going cold turkey like that, so it was quite scary. But I fought through it and married my girlfriend in Las Vegas at the end of the tour, then we had a beautiful baby boy and my life has been blessed ever since.

I didn’t want to write about it, but we knew this was the album that was going to have substance and depth. It took a lot to come to terms with writing it down and getting it out there, but I know, in the long run, there’s kids in our country  who look up to me that are going through the same thing.  So if they can see me standing here and being completely honest about it, they know that I’ll stand with them, because trust me – it’s sunny as fuck on this side.

There was definitely an epiphany moment between Jonathan and I [when writing] where we thought, we can’t worry about our parents hearing this, or someone we don’t want knowing about these things. We’ve got to be brutally honest and not to be rude, but, put our balls on the butcher table, and we did and I feel like personally, that [Devil In My Shoulders] is one of my favourite songs on the album, because it’s so real.

There’s a really great number of collaborations and features on this record too. How did they come about?

They were all organic! We write the hooks ourselves, then if we feel like we didn’t really represent the singing that well we’ll try and reach out. Believe, for example, was sent over to a studio in Los Angeles and Mario happened to walk past when it was playing, then called us up and asked if could sing on the track. A similar thing happened with Gavin James who heard Moments through another studio in London.

With the rappers it is a little different as we really want who we want. But we’re very lucky to be in similar friendship circles to a lot of them. So Dizzy Wright’s Dj [DJ Hopper] actually did the production on the first single for our debut album so that’s how we connected with him. We prefer to let the connections build organically rather than go hunting, you know.

I’m sure the list is endless, but is there anyone in particular you would love to collaborate with, given the chance?

Mate, so many! It sounds cliche, but get me and Kendrick [Lamar] in a bloody room and I wouldn’t mind it! (laughs) Also Andre 3000 and Mick Jenkins. Shit, there’s just too many!

It has only been out for two weeks as well, it’s crazy! When Gavin originally sent us his vocals for the track we knew it was going to be something special – he gave life to the lyrics.

When you’re listening to the first verse by Bliss about all the first moments in life, you’re not thinking of his, you’re thinking of your own.. So it’s very personal to everyone but also very broad and when music has that connection which allows people to put themselves into a song, it’s just magical.

Moving onto your upcoming tour in July, for those who haven’t seen a live show of yours yet, what can they expect?

Lots of energy. I always try and say the craft. When we were in America a lot of MC’s didn’t have DJ’s or if they did they were using that really annoying noise between songs which proves they can’t mix one song with the next. When Bliss and I were free-styling they couldn’t quite believe it also because according to them, that’s an opportunity to fuck up and look stupid. Yeah, we may wing it, but we always hone it back to our craft. So you’ll see a turn table, you’ll hear beat-boxing, free-styling and a great mix of songs off this album and the old ones.

Do you have any crazy pre-show rituals?

I used to when I was a drinker (laughs). It would be head butting, throwing a meat pie at the TV while trying to play guitar hero through the meat sliding down the screen, but now I much prefer a small, quiet room, incense burning and Bob Marley on the speakers or whatever with a door straight onto the stage. I just need that calm sense of mediation before performing.

Any final message you want to share with your kiwi fans before the album drops this Friday?

If you don’t have that much of an imagination, you might hear the name Off The Grid and think they’re hippies on some farmland or something. NO! We’re talking about literally unplugging from the system. Like Neo and the Matrix, like the movie Tron when he realises there’s a user controlling him – Off the fucking grid, we are out.

We need to unlearn what we’ve been taught. I’m changing all kinds of shit in my life. I don’t even say “good boy” to my son when he does something for me, because that’s what I say to the dog you know. But that’s what my father always said to me, so I’m trying to unlearn those ways. When my son does something for me, I say, “Thank you Zephyr, Daddy appreciates that.”

We need to get off the grid and put down social media, put down computers, because what’s the effect of too much information? We don’t know! But we’re going to find out soon because we’re continuously pumping ourselves with it.

Bliss N Eso – Off The Grid out this Friday 28 April.