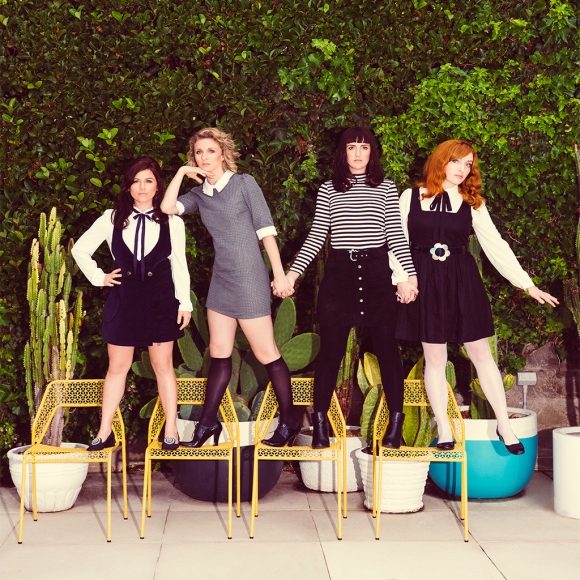 A badass female foursome and powerhouse of charm and songwriting prowess – Sydney based quartet, All Our Exes Live In Texas don’t do anything by halves. Releasing their critically acclaimed debut album ‘When We Fall,’ to the world in March this year, [which fun fact: peaked at number 8 on the ARIA charts], vocalist and accordion-playing superwoman Elana Stone kindly took some time away from writing and making crafts at music camp to answer a few of our burning questions about what the band have been up to lately and what is yet to come.

It’s so cool to see the band played at SXSW recently.. How was that experience?

SXSW was incredible. It was HUGE. Our mandolin player basically got caught in a STAMPEDE on 6th Street, Austin because there were so many people. Our highlights were seeing Lizzo, Big Thief and Girlpool and playing our own showcases.

We heard a lot of great comments about your showcases. It seems they respond very well to The Exes sound over there – is the US market a big focus for the band?

The States is such a big market and there is a dedicated folk music/americana scene there. Our music is very much inspired by tradition American Folk music and so it makes sense that we would aim to play as much as possible over there. We are playing with Midnight Oil in the States in May and we hope to be back over there for Americana Fest in September.

There seems to have been a real resurgence in Folk / Americana music over the last couple of years ~ Why do you think this is & why is it so important?

This is certainly true in my world. The music itself is so beautiful. I remember when I was fresh out of jazz school and my good friend Ben Hauptmann was talking about how much he loved country music. I made fun of him. In my head, country music meant pop country – more Kenny Rodgers than Gillian Welsh. I hadn’t really listened to Hank Williams or Dolly Parton in any serious way. Then the movie ‘Oh Brother, Where Art Thou’ came out and the penny dropped. I think Americans are also enjoying their own traditional music played back to them through a filter of whatever country the sound has been absorbed and reflected by. In our case it’s Americana through an Australian filter.

Congratulations on the release of your debut record’When We Fall,’ we’re so glad the wait is over! How does it feel to have it out there for the rest of the world to hear and have you been happy with the response it has received thus far?

It feels fantastic to have our songs out in the world. We are so proud of the work we did with [producer] Wayne Connolly. The strings, banjo and horns plus the rhythm section – all the bells and whistles (no actual bells or whistles). Double J have been slogging it which is fantastic. It has been getting radio play in the States and Ireland. We got some amazing reviews in Rolling Stone and the Sydney Morning Herald. Plus my mum (Judy Stone – nurse) gave it four stars!

Rewinding ever so slightly – You all come from such incredibly talented and creative backgrounds.. How did you end up meeting one another and decide to form the band?

We met at a support group for people with op shop addictions. Nah, but actually we just liked the cut of each other’s jibs. The idea for this band was always FUN. We wanted to hang out and learn new instruments and harmonise together. There were a few Sydney bands in our circle who were doing folk music with vocal harmonies. I was actually in one of them: The Green Mohair Suits and The Rescue Ships – but the guitarist and I broke up and the idea for Exes came up around that time. It was perfect timing.

How does the writing process within the group work.. Is is very collaborative between the four of you?

On our debut album we wrote each song individually and brought it to the group to arrange. Lately we have been more collaborative in the song writing process. We recently went to LA and wrote with Tony Buchan (Montaigne, The Preachers). It was 100% collaborative and the results were awesome and the process was so much fun. We are actually doing a music camp right now that involves us all writing and arranging together. It’s a great time.

I was interested to find out that you ran a pledge campaign to fund part of the record. Artists always seem to have varying opinions on crowd funding projects. How did you find the experience?

We couldn’t have made the album without Pledge. It’s an amazing tool for unsigned artists to get their music recorded and pressed and publicised. We enjoyed thinking up all the rewards (personalised drawings, cross stitching, recipe books and crotched dolls in our likeness) but now we are having to produce all these rewards. Let’s just say, it’s a lot of work. We have spent a fair bit of music camp doing craft.

We’re big fans of the Cadillac music video. Can you tell us a bit more about the inspiration behind the song and the video?

The song itself is quite old fashioned in its way. It’s about wanting a boyfriend who has a car. Our ukulele player wrote it and it’s fairly ‘tongue in cheek’. The 1950’s setting of the video exaggerated this irony. It’s actually a bit scary.

The band’s image in terms of your prominent vintage styles are very striking. How important is the element of fashion & sense of style to the band?

We all enjoy dressing up and when you have four ladies back stage getting ready for a gig – it’s fun to put on make up and do our hair and try and wear nice outfits that compliment each other. It’s an aesthetic that has happened naturally with the evolution of the band. When we do a photo shoot we talk about it conceptually – for example ‘The Devil’s Part’ video was styled in the vein of Charles Manson cult wardrobe or on the ‘Tell Me’ clip we wore matching soccer uniforms.

Ok, so the four of you walk into an op shop.. what happens? Are there any particular rules?

Actually Hannah has very specific rules in vintage stores. Rule one: stop the car and let Hannah out. Rule two: don’t touch anything that she is already touching (der). Rule three: don’t talk to her (weird). Rule four: don’t get in her way because she is on a MISSION (scary). Hannah says she enjoys op shopping (we call them opportunity shops is Australia) but she looks stressed to me!

You’re about to head out on your national album tour which is very exciting, what do you like the most about touring?

Well this is going to sound really sappy but the best part about touring is getting to hang out with my three best mates 24/7. It’s such an enjoyable adventure with these guys. Every so often I miss my own bed/space/pillow/boyfriend/family but mostly I love waking up somewhere new with my besties and playing music and meeting new people. It’s a pretty amazing life.

We’ve heard you described as a bit of a nana band before. So throw your most rock n’ roll story at us.. There’s gotta be something?

I guess I’ll have to tell one that involves me so that I don’t get anyone into trouble. To be honest ALL of my rock n’ roll stories end with me passing out and vomiting on myself so I’d rather maintain the nana label than tell you one of those stories. There WAS the time I met Whitney Houston on Gouger St in Adelaide. That was THE BEST. She came straight up to me and asked me where she could get the best Chinese food around there. I gestured to a place and she said ‘We tried to go there but those f*$cken f@*#’s wouldn’t let me in’. It was WILD. I went in and sorted her a spot at the restaurant. They had not realised who they were dealing with (Whitney, not me).

We’re aware New Zealand probably isn’t hugely high on your world-domination hit list, but we’d love to see you here some day! Do you have any plans to tour the record here in the near future?

God that would be good, wouldn’t it? I bloody love New Zealand! We met Neil Finn the other day. Could someone convince him to take us on a tour of NZ? He played solo at the Opera House. It was one of the best gigs I’ve ever seen.

So what’s the first thing that comes to mind when you think about New Zealand?

I think back to camper-vanning around NZ with my family as a kid and listening to the New Zealand tourism song ‘Parks for People’ over and over while we drove around looking at incredible scenery and fighting with each other. I did another trip with a boyfriend in 2010 and it was amazing. We kayaked over Milford Sound and patted baby seals in Kaikoura. I heard this area was devastated by the earthquake last year. I thought of all those little seals and got real sad.

What else is in store for you throughout 2017?

We are touring a lot this year. We head to the US to tour with Midnight Oil this month, then we come back to Aus for a headline tour. After that we head to the UK and Europe for some shows later in the year, then back to the States. After that who knows? New Zealand hopefully. All the while we will be working on our next album (in fact we have well and truly started) so that’s going to be fun too!

An embarrassingly cliche’ question to end on.. BUT, do you actually have any exes living in Texas?

Nope, they basically all live in Newtown, Sydney!

All Our Exes Live In Texas debut album‘When We Fall’ is out now!
http://www.allourexesliveintexas.com/