.WELCOME TO THE PLEASURE DOME.

80’s fever is spreading far and wide across Auckland as Pleasuredome – The nightclub of the century brings 1984 New York to our doorstep and offers the best party of your life. Unlike anything we’ve ever seen before in New Zealand, the Manhattan styled streetscape alone is enough to blow your mind. While being frisked for cash from the lady selling NYC memorabilia in the dark corner of an alleyway, to dodging the cops that are chasing hookers and street buskers, this is fully-immersive theatre like you’ve never imagined, and an important side note: the hotdogs are to die for.

Upon entering the Pleasuredome nightclub itself, glam, sequins and hair (lots of it) come in plenty. As do sex, drugs, love, high-energy dancing and singing to all of those top 80’s hits and some very loveable and loathsome characters. Whilst superstar Lucy Lawless plays the sexy hedonistic diva, Sappho, throughout the story of desire, addiction, greed and the power of love, it’s her co-star Ashleigh Taylor’s remarkable vocals and stunning portrayal of Lilith, the daughter of Trump-like businessman Victor, that’s just as much the one to watch.

“Lilith first appears as your upper-class, rich-girl type” Taylor speaks of her character. “Her father is a very successful and ruthless businessman which plays into her character, as she’s a bit stiff and not very open to the fun that she embraces towards the end of the show,” she adds with a laugh. “Lilith is stuck in this relationship that she’s not entirely happy in and has this feeling that there are a lot of problems that haven’t been addressed yet. Then as she starts to figure out how to solve those problems, she meets this whole community of people that are the exact opposite of her and through discovering those people she discovers herself – lets her hair down, falls in love and gets herself into a bit of trouble.”

“When I first received the audition brief and script, I immediately felt like I would be really right for Lilith,” Taylor confesses. “The way she is written is quite similar to me as a person and it doesn’t feel like a stretch to put myself in her shoes.” While there have been no real challenges within the role to speak of, something Taylor confirms has been made easy by how great the cast are to work with, she jokes that the 360 degree-angle stage was a little daunting at first. “There’s a moment in the show where the drag queens take my dress off and I’m just standing there in my underwear and I’ve got people looking from below which is never a good angle!” she chuckles. “Then there’s people looking from above, people eye-level to me and there’s just no part of you that can be hidden on that stage, but you soon forget about it and everything begins to feel pretty normal and I’m at the point now where can I just focus on telling the story rather than the people watching me.”

Now three weeks into the show and fully immersed in the ways of the eighties,  Taylor, a 90’s baby herself, burst into laughter admitting the little knowledge she had about that era prior to the show came down to a photo of her mother wearing leg warmers. “That’s about the only reference that I had to the 80’s! I had never heard some of these songs before now, but all of the music is so much fun and so different to what we hear on the radio now and even what I heard when I was growing up in the 90’s. It’s very catchy and so often very, very lame and I love it!”

Based in Sydney and a strong supporter of the LGBT rights movement, Taylor reveals,  “It’s really interesting to me that the show was written ten years ago, but is still so relevant to what we’re fighting for today, especially in Australia. It’s so disheartening that we’re such a forward thinking nation yet we’re having to vote on something that we shouldn’t need to, but at the same time I’m really glad that I can be involved in something that is speaking such a positive message about the homosexual community.”

“Throughout the rehearsal process there was always this need to be aware of what we’re saying in each scene and to especially understand the time we’re portraying, because being gay in the 80’s wasn’t as accepted as it currently is and through this show I have learnt about the hardships the LGBT community really went through at that time,” she reveals. “Lucy has been educating everyone, telling stories and really making us aware of what did happen, so the whole cast has been working hard to stay as true to the message that’s being said.”

As for what it’s like working alongside Lucy Lawless, Taylor can’t sing her praises enough. “She is a beautiful person to work with and I have really enjoyed getting to know her. I have such a high level of respect for the work that she does throughout the rehearsal process. She is the kind of performer that asks a lot of questions to really understand what is happening in a scene, which I love. She’s also been nothing but kind, caring and supportive to me throughout this whole process, always making sure that I’m taken care of and feel comfortable with everything. She’s the utmost professional and I feel very lucky to have had the opportunity to work with her, we’ve got a really lovely rapport between us so I think we’ve both been learning from each other.”

Undoubtedly the most talked about show of the year with the likes of the NZ Herald describing the show as “compelling,” “utterly immersive and utterly impressive,” and Newshub dubbing Pleasuredome “The Best Show Of 2017,” a statement we couldn’t agree with more, Taylor confidently agrees that Pleasuredome is a ‘one of a kind show.’

“I feel like this show speaks to a broader audience, beyond those who already like theatre. Pleasuredome is for everybody! It’s a big 80’s dance party and I don’t know a single person who doesn’t like an 80’s dance party,” she laughs. “The audiences we’ve been getting are coming in from all different walks of life and it really excites me that this could be the first time they’ve seen a show and I get to be a part of the team that gives them that experience.” 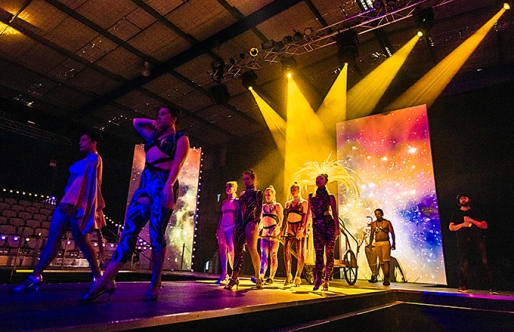 “From the perspective of a performer too, it feels a lot more raw than any other show I’ve done before in the way that there’s a lot more freedom,” she admits. “In other shows you’re more or less told exactly what to do, but because this is the first time that this production has ever been staged, it almost feels like a workshop and our opinions and ideas are really taken on board and often placed into the show,” she acknowledges. “It’s constantly growing as we keep adding things to make it better and putting those into place and watching the show grow while you’re on stage has been really exciting.”

“This is a really fun night out that is more than just sitting down and watching a show, it speaks to people on so many different levels,” Taylor concludes.
_______
So what are you waiting for? No words can do this show justice, but our three-time attending thoughts are that you’d be mad to miss it. This is your chance to travel back in time to the hustling and bustling streets of New York and Studio 54, no plane ticket or time machine needed.

It’s outrageous, it’s electric and it’s beyond your wildest dreams.. so get those tickets and ENJOY THE WILD RIDE!