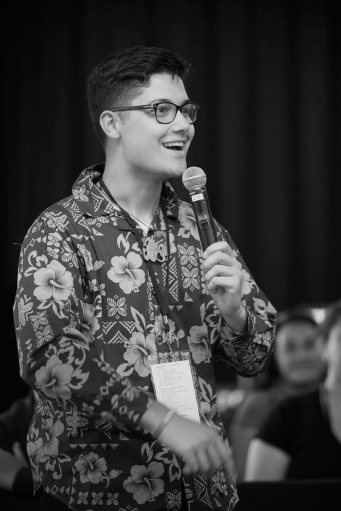 My Dad was born in Samoa and my Mum was born in Australia to my Scottish-English grandparents who were born in New Zealand. My Dad moved to New Zealand when he was 17 and Mum grew up in Dunedin which is where I was born. We moved to Christchurch when I was six years old and had a fairly quiet upbringing with both of our parents and grandparents.

When Dad first moved to New Zealand he felt very disconnected to his Samoan heritage and never really felt like he was enough. To try and make it easier for him, his mother changed his last name from Tualamali’i to Brown. Collectively, to help him feel like he was one of them, his rugby team called him James, so he became known as James Brown.

One thing I admire about my Dad is just how much effort he put into trying to understand life in a whole new world and that idea of being bi-cultural. I believe everybody can be an expert somewhere, but I feel like sometimes we look at people and forget that. My Dad is an expert in Samoa for example. He can climb a coconut tree, get us lunch from the plantation and do all of these things that I can’t. Then you look at him in New Zealand and see him adapting to something that he’s unfamiliar with.

At school there was a lot about the importance of growing Maori awareness and I really enjoyed getting involved in that, but that was the closest we got to Samoan culture until I was about fourteen years old and realised that I was missing something. Up until then I feel like I had brought into the media idea of what Pacific People were, so my view was really slanted.

When I started to learn, understand and claim my heritage, some of the people who were close to me didn’t quite understand that journey. The biggest thing I learnt during that time was that your identity is valuable wherever you are on the spectrum. I’m half Samoan and half Palangi and as a kid that somehow made me feel less-so. For a long time I almost wished I was just one or the other because it felt difficult to sit in the middle. I think each young person in New Zealand needs to experience that sense of belonging, feeling and understanding that Aotearoa is their home and they don’t have to justify who they are. It is said that the best indicator of success is feeling like you belong, because if you feel that way then you’re more likely to participate and share who you are. No one should ever feel shameful of their culture and who they are.

Around that same time I went to Samoa for the very first time and came away with a greater sense of humbleness about the way I grew up and a realisation of how much harder it was for my Dad. I am so blessed to have grown up in New Zealand and there are a lot of people in Samoa that would significantly benefit from growing up here too, but don’t have the opportunity to. That first visit to Samoa was also really helpful for me to better understand my Dad and it allowed us to grow so much closer. One thing that was always tough for my family was finances. I look back now and realise that there were times when my parents would eat less, just so my brothers and I would have food. Sometimes we couldn’t take part in activities because of funds, but my parents would find other ways for us to be involved in things, which to this day I’m still grateful for. They really showed us how to be adaptable and resilient.

Before the Christchurch Earthquakes there was an event to increase Pacific Youth voice in a simulation of Parliament for Pacific Youth. Following that we came up with the Pacific Youth Leadership And Transformation Council (PYLAT). We didn’t really know what we were doing and a lot of the time that’s how it is. We were just giving it our best shot and so far that has turned out to be quite a good shot. The thing is, there’s always been a need for people who understand Pacific World Views to connect with Pacific communities and encourage them to share their voice and that’s really what we’ve been doing. We provide leadership development opportunities for Pacific People and support them in the ideas they wish to discuss and share.

‘Pacific Peoples’ doesn’t really exist. It’s a statistical grouping that the government has made for ease of business. If you’re from Tonga, you’re Tongan, if you’re from Samoa you’re Samoan, but particularly in the South Island, we work mostly as ‘Pacific Peoples,’ because we don’t have the numbers to have our own separate community each.

Auckland is considered by many to be the Polynesian capital of the world. Apparently there is more Pacific Peoples as one group than there is Maori, whereas down south we’re definitely not the majority – At times we’re about 2 percent of the total population in the area. The difficulties for Pacific communities in the smaller rural areas is that we aren’t always the priority, because when you’ve got the population you can obviously command more attention.

By 2026 one tenth of New Zealand will be Pacific People. By 2050 nearly half of our country is going to be brown of some Polynesian or Asian ethnicity, so the opportunity is to use the people that we have now to help build those communities solutions. Through empowering these young people and giving them a better understanding, we are sure that we can better prepare and also better respond to the needs of those people. The government have never really had a programme that prepares people to arrive in New Zealand. When you have a guest over for dinner you put effort into preparing your house or a meal and there hasn’t been that same effort being put in for the future Pacific and Maori population, so that’s the kind of opportunity we’re trying to support the preparation of.

Because all of this started when I was fourteen, I had a lot of those core experiences really early on. So now I put a lot of emphasis on encouraging adults to trust young people and give them the opportunities to develop their skills earlier on. That might not mean allowing them to get their drivers license earlier, but at least help them in co-decision making in their homes with their families so they can make mistakes and come out being able to do awesome things earlier because they’ve been given a platform to practice.

We ran an event in Pacific Youth Parliament last year and a boy came up to me at the end crying. He said, ‘this is the first time that I have ever felt my identity is validated.’ While the awards are really lovely and I’m very grateful for the people that have nominated me and put me forward, having a young person say to me that they feel they are loved and supported within their community, means more to me than anything. There is so much out there that makes people feel like they aren’t good enough, so if our programme can help them realise that they are, then that’s everything to us.

After winning the Prime Minister’s Award in 2016 I got to go to the United Nations while the World Health Organisation Conference was happening. This event is the key leader in everything health related in the world and New Zealand used all of its relationship power and influence to put a Pacific item on the agenda. For something to get on the global agenda it has to be really significant and matter to a lot of people. They worked on ending rheumatic fever, which is pretty specific to the Pacific. But what New Zealand did, although being a small country with not a lot of resources, they worked out links that existed between rheumatic fever and other heart conditions that exist in Africa, the Caribbean and other parts of the world. So we were able to go to the nations and say that if we prioritise this, then we’re actually prioritising the issues that the wider communities also want to discuss. Being able to see the way our country utilised their resources and relationships built up over our international dealings just made me even more appreciative and excited for our country’s future.

I really enjoy being an advocate and helping people speak to decision makers. If I can find a place where people listen and I can keep learning then I’d love to do this for the rest of my life. I don’t really have tangible goals, but I don’t think that I really need them either. I often feel that people get bogged down by putting a timeline on the milestones they want to achieve. As long as I can support my family and watch my brothers grow up happy and healthy, that’s tangible enough for me.

One of the best pieces of advice I was ever given was, ‘don’t ask for advice if you’re not listening.’ There’s definitely been times when I’ve been growing up and I’ve asked someone a question that I’m not ready to hear the answer to. It’s a very good personal development thing to know. If you’re not ready to listen then perhaps it’s better to ask them at another time when you’re ready, because advice isn’t about hearing yourself talk.

One thought on “JOSIAH TUALAMALI’I”